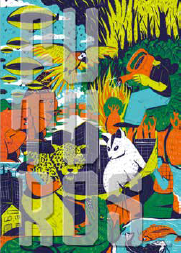 The landless exiles don’t go to the supermarket

n August 2017, like almost every year, people from the countryside occupied the parks and streets of Asuncion, and the city looked the other way. The city, a space for dialogue and where diverse perspectives should meet to come up with visions of a shared future – national projects– refused to recognize those who make up a third of the country’s population. By looking at others, we acknowledge their existence and can feel empathy. If we look at each other, we exist, and are able to put ourselves in each other’s perspectives. But the city, once more, decided to avoid the conflict that defines the present and the future of Paraguay: the resolution of the struggle for the land.

It’s easier to believe that this conflict is someone else’s business when only three corporations hold almost every news outlet in the country. Their particular interests – corporative ones – are framed as universal in the headlines of newspapers and on news shows. They set the tone of the national debate. The city reproduces their lies. The media corporations dictate which national projects will be sought. The city gives the coup-de-grace by alienating a “the others”: entire populations like the campesino population, like the indigenous communities or the people from the shanty towns.

An economic agreement that demands a lot of land, few people, and no trees, steals these people their source of labor, their identity. When their way of life is discarded, a way of life profoundly connected to the land, they become exiled from a vision of the future that a few are designing for some other few. Their banishment is not only material but existential.

These series of chronicles aim to shed some light on the contradictions and struggles that impact the lives of these communities. People like Rodolfo Castro, a descendant of occupants, who needs a land-lot to survive in a country that allocates 94% of its fertile land to the cultivation of soya that feeds pigs in China. Campesino women like Gregoria Fernández, who defies the territorial expansion of Brazil with her own life, even though the Paraguayan government harasses her with bullets. She claims that the only way they will take her away from her town of Guahory will be to drag her directly to the cemetery, she won’t leave her place any other way. Exiles like Severiano Ruiz Díaz, who doesn’t need to go to the supermarket for food. He sows the land. But his harvests don’t reach the aisles of the supermarkets. Due to bad roads, unjust agreements with the intermediaries, and an absent government, he loses every chance of selling his food production to a country filled with children who are hungry.

This series entitled «The landless exiles don’t go to the supermarket» aims to draw a portrait of them: people who live from the land, people who struggle to avoid the abyss that the few have planned from within the city. This series is an effort to make the opposite of looking the other way. It might become awkward, sometimes terrifying. Such is an abyss. But only in our capacity to recognize others – the landless exiles – there’s a chance of a future for every man and every woman.